It’s day’s like today I’m thankful that I like to keep a blog as I go along to remind me of where I’ve been. Frankly I’m sat here, writing, not sure where to start because this morning seems like such a long time ago!

We started with breakfast next door to where I am staying, before heading off to Hong Kong Park. Hong Kong Park was full of views – the parky green nestled within the tall skyscrapers!

As well as Parky Green was a number of water features and water falls… Many of you may know that I LOVE Water features so was delightfully amused.

Also within HK Park was an Aviary – we went for a wander through and saw lots of different birds from all different places… they looked like they were having a great time (The Aviary was HUGE!)

From the HK Botanical gardens we walked to the MTR for my first experience of the “Hong Kong Underground”… Everything is HUGE! The trains are loooong… The stations although underground are bright an airy… and there’s often LOADS of shops past the ticket line… its mental!

Between the Gardens and the MTR we stopped at a Starbucks “Done up” like and Old Fashioned HK Cafe. Interesting!

On the MTR, we ended up at the Nan Lian Garden / Chi Lin Nunnery & Temple Complex… Which was another incredible garden (Including water ofc!) The gardens were beautiful and had wonderful views.  There was also loads of different buildings in traditional architecture as well as exhibitions on the architecture, and a rockery!

We wandered round the Temple, taking in the sights and Leonie and I managed to have my photo taken with some random strangers from Mainland China!

We entered the inner temple where photos were strictly not allowed (although it seemed many people couldn’t read the signs!) and looked at a number of Gods which were placed round the outside, while traditional Buddist chanting could be heard.

We walked up to the largest Buddah in the complex, and joined the queue to go and pray to him (because we’d noticed a nun giving out freebies!) While we passed, we span a wheel for knowledge (Maybe I’ll become enlightened) before taking the small red envelope from the nun… The “Freebie” that we’d seen being given out.

Leonie and I each took the red envelope and (disgusting) sweet, whilst Hilz not only refused, but then managed to rub the nun up the wrong way by asking her where she lived… i.e. on site or elsewhere. The nun barked “not for you to know” and Hilz tried again, receiving the same treatment. Buddah is not looking kindly on Hilz now! 🙂 🙂

Buddah is however looking somewhat kindly on me… While Leonie’s envelope contained nothing, mine contained a 20 cent piece. Thanks for the 2p Buddah, I won’t spend it all at once!

From the Gardens/Temple we wanted round the very posh “Holywood Plaza” shopping mall, deciding where to eat, before settling for take out sushi. (YUM!)

We then got on the train and headed to look at some of the markets.. We wandered through the flower market which was pretty but mainly rather standard western flowers.. perhaps rarer out here than at home.

We found the Bird market, which was odd. I know it’s common to keep birds as pets here, but they did look a little unhappy in such small cages. I did manage to find a lady “Trying on a Parrot” which subsequently ate her hair!

From the Bird market, we found ourselves lost in another very large, very nice shopping center called MOKO looking for somewhere to get some form of tea or coffee…. We went on a wild goose chase trying to find the “Food Opera” which we still aren’t sure what exactly “Food Opera” means because we never found it and ended up in Pacific Coffee in stead.

From MOKO we headed back to the apartment for a VERY brief power nap before heading out for some dinner at the Tea House in the Hong Kong Garden. We each had to chose some tea (which was lovely… I had a red tea) and then ordered Dim Sum including Purple Sweet potato cakes and some Sweetcorn cakes.

From the Tea House we rushed to the MTR and across town to the Light show, where we watched the Guinness world record holding permanent light show (or some crap fact like that!). Loads of the buildings on the other side of the bank all work together to make a light show to some bloody catchy music. All the different buildings light up differently and it was quite good to watch.

From there we went back on the MTR to the Ladies Market. Before we got to the ladies market we got caught in this crazy street market with in-street karaoke and all sorts. We wandered through the very quiet ladies market, and ended up back at the Crazy Street market where Hilly decided it would be a good idea to go and dance with the crazy dancing Chinese people. 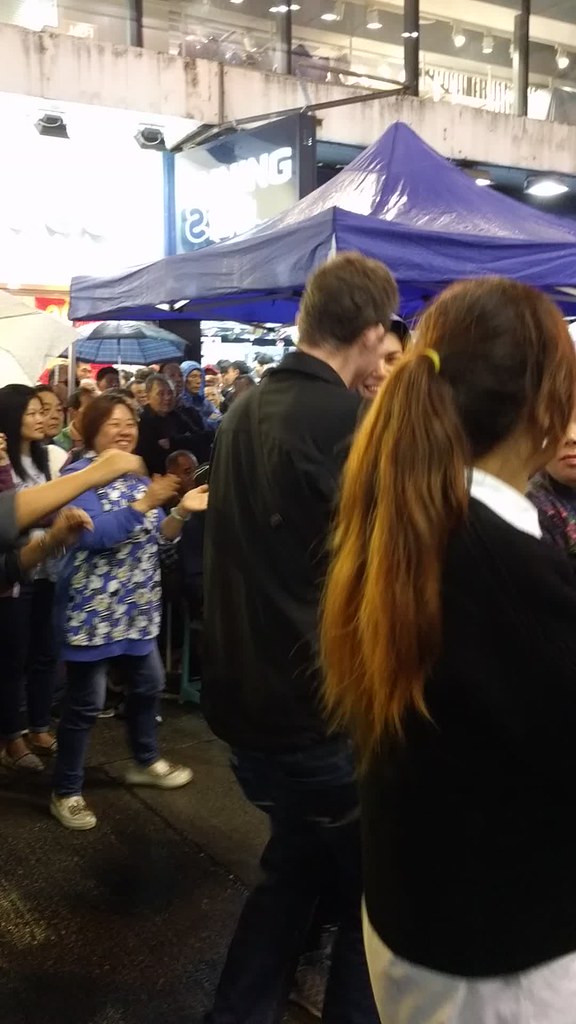 From the crazy market, we headed up to another tiny street market before deciding it was time to head back home (Via the Star ferry).

This involved getting a bus (Which was much nicer than London!) and then getting the star ferry. We splashed out on the Upper Deck, spending 34p as opposed to the lower deck at 25p. BIG SPENDERS.

From the Star Ferry terminal we headed back to where we are staying Via Mc D’s for a cheesecake and a cup of tea, cos I was hungry! (CHEESECAKE. Mc Donald’s is always much better abroad!)

Now is time for bed. I’m knackered, but surprisingly not very jet lagged!

[Note at time of publishing:  Lady Hizzle of Arkley  did not mean to cause offence to the nun, simply wished to inquire out of pure curiosity as to the living arrangements for Nuns working in the Temple. We are pleased to note that no charges were pressed]